A downloadable game for Windows and macOS

Starry Chain is an NSFW, gay furry visual-novel focused on the adventures of the main character Kailan Sabre. Depending on your choices, Kailan might learn something new and/or useful about the world he lives in, increasing or decreasing his relationship with other characters or getting himself in trouble. Every choice has some kind of impact and the narrative and it may change the outcome of the story.

The story follows Kailan, a spotted panther that is the last of the Anomaks, an ancient race with powerful magical abilities, and so he is hunted by the church of Saliphe, seeking to annihilate his race. As the result, Kailan was forced live hidden with his father in a forest far from any kind of civilization, but when the calamity arrived and the forest began to die, they were forced to move safer place, a village near the World's Tree. However, arriving at the village Kailan notice that something is threatening the village and the world.

if you'd like to support me on Patreon, you can find my page here!

Hope the dev is okay..

i would recommend to just do a new story altogether, even if heavily inspired by this. reviving a dead project without explicit approval is... well, let's just say it raises some red flags.

yeah sorry bud but as much as I would like to see this project grow I'm pretty sure they are more than one law article against taking over someone else work ^^'. Well to be more precise let's just say that if you happen to work on it you would be obliged to explicitly tell that this game aren't yours and every benefits you could do with the game would go to the original artist. In other word you would get in trouble with copyrights ^^'

Time to face facts everyone the creator of the VN is gone for the past 2 years we have not heard anything about the VN or it's creator.  This VN was gem and will always be a wonderful start of a story but the rest of it will only be filled with my imagination.

PS: I'm not the creator I'm a person who looks at this page and the creators twitter every month to see any updates.

it's good to see other people wondering where the creator went

Very worried about the person who created this, anyone found any news

I found the files for this game hidden deep in my computer when I was trying to clean it. I downloaded it back in '19 and never heard of it being mentioned ever since, which brought curiosity and I decided to play it. While it was really short it captured me almost instantly and I wanted to see what happened to this VN. While I wasn't expecting it to have been abandoned, what bothered me the most is that the creator has been gone from all media for almost two years now.

I know that probably he won't get to read this, but I just want to know how you are doing. I don't really know you but I feel genuine concern and fear that a talented creator like you has been so silent from these past times.

Wherever you are, if you are still here with us, I want to know you are okay and give you my blessings.

I felt the same way and have been concerned for his safety for a long time. I tried messaging him on Twitter and patreon, but have not gotten any messages back from him. That was last done about a month and a half ago, and I am concerned that he may have possibly gotten covid or something and didn't make it... I still am trying to hope he is OK, but I am starting to lose hope on that matter.

Hey buddy, where are you? Please say something. The game doesn't matter anymore, just let us know you're fine.

Such a shame this project was abandoned. It really had potential. But then again, the game's creator had been dead silent on his social media ever since last year and no further updates afterwards.

I was hoping he was ok but now I'm not so sure anymore.

Yeah, the guy is brilliant! He said something about being through a flooding, home invasion and theft. I hope he just lost his files and not his life. I  come back here from time to time hoping he gives any sign, but everything remains silent.

For that, you better create your own visual novel and leave it in oblivion, apart he left it almost at the beginning, there is nothing to work with to continue it, not to mention the fact that the vn is still his even though he has been missing for more than a year

Ok bad news everyone the creator Patreon no longer exist (I've just check), so it's pretty obvious that this game has been abandoned (last updated was in 2019), sad to see so much potential go

dude that was more than a year ago, don't get your hopes up too much

i wish the creator giving this project (if he drop this *A.K.A  give up to make*project) to other to continue making this game unless creator still making it

NOOOO I WANT TO KNOW MORE ABOUT THIS UNIVER PLS XD.

Seriously hope for a comeback one day. The story was so intresting so far i need to know more about thoses monsters, powers and all they were talking about...

its such a sad sight to see something with such great potential being abandoned, I wish you the best dear creator.

If you're reading this, add more tags so more people will see it. Also, please update the status, if the game is truly abandoned. I really enjoyed my time and hope you're doing okay.

good news: the creator did not die in the flood

bad news: last thing he said was back in february 2020 on twitter

pls everyone who read this support him on twitter

Where at? I looked on his Twitter and there was nothing for about a year now

It's been a year guys, let the vn collect dust and die, the creator is obviously not coming back. We can only hope he is okay

398 days to be exact at the time of writing this

It's a shame to see such an amzing project get abandoned, I do genuinely hope the author is ok. I checked their patreon to see maybe they've updated it (and to join if they have) but no, sadly it hasn't been updated since Dec 2, 2019.

Hi Grim-Meow. How's your status? We are wondering if the VN is still alive or it's officially dead. Please message back and we hope this masterpiece still has life in it.

I hope the creator is not dead 😞😞 . I get the feeling the creator was stabbed in the streets/city or assassinated somewhere, and I hope it's not true. The creator left this remarkable masterpiece here.

the closest to death bringing news is that one of the comment said that there was a flood at where grim lives, so let's just hope that all this hiatus is just because his pc broke and needed a new one, any better news is welcomed

If I searched right, Grim-Meow has a Discord. Anyone know if he also dead silent there as well? It's a shame that this project was abandoned and I like to know what happened since his Twitter hasn't been updated ever since February. I really hope he's okay.

I see a lot of people asking the creator if he is ok, what is going on?

Edit: oh Grim has disappeared? Still no news from him?

I hope there ok.

He said something about invasion of property and theft. Maybe he lost all his work? But again, I think he'd have posted something about it. Such a talented guy! I wish there would be a way to know what happened.

You can use the app joiplay, on the playstore.

Oh dear, Grim...I hope you're doing okay. First you get trapped on a tropical forest, and now with the pandemic, especially since we're in Brazil...I'm not trying to exagerate, but if you're no longer with us, I hope you rest well.

The creator just... gone? he didn't update his twitter, no updates on this game, etc

i hope he is okay

Did the project get dropped? I was so excited about the father and son route but it's been over 6 month since last update ,I heard the dev had some trouble but nothing serious I hope he's ok .

I have no clue, I really hope he is doing okay though.

I think he would notify us if he had dropped it.

awww... there no new updates.... im. really exited becase the characters are super amazing. (specially the mains dad. grrr.... so freaking hot... ) and hoping that in some part of the game they could use some dad and son bonding...(in bed) haahaha welp this is an amazing game and the story is so satisfying... welp wish for the new ups.

I wish you the greatest of success, so you can continue to work on the project. I sadly can't play it (yet), but the thumnails/pictures look amazing! Nobody should have to abandon their work... I hope you are at least well and healthy and life doesn't screw you. We all know that feeling, some more than others.

I loved this story and all the characters are so lovable I hope you will continue to work on it.

i really enjoyed reading this and i don't feel the same for much other vn really nice job! i saw your last update was a bit ago hope you aren't anyhow injured/hill or just life messing with you i wish you the best of good in life

his last twitter post was on feb 29th, sounds like he's been through a lot. He's probably still getting into the groove of things if i had to guess

Thxs for telling me. I dont usually check people's twitters or anything.. well whatever he is going through I hope it works out not just for the game but just for him as a person.

Is he dead? Where is he hiding? I hope he's Ok

when is the next version supposed to be coming out for patrons? I am so excited for it

the creator has been mia on twitter for over a month, hopefully he's okay

Seems like he had a lot of trouble in the last few months he seems ok but may need more time to get situated. A update even if it's not to the game or even related to the game would be nice. It sounds like he needs some positivity right now.

He's already said why that won't happen yet

oh ic, I hope it can work happened 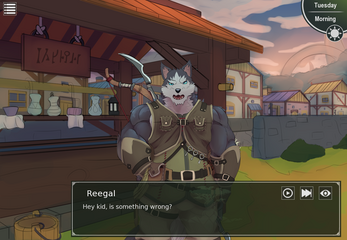 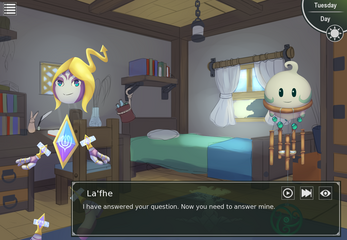 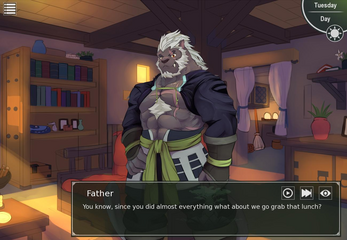